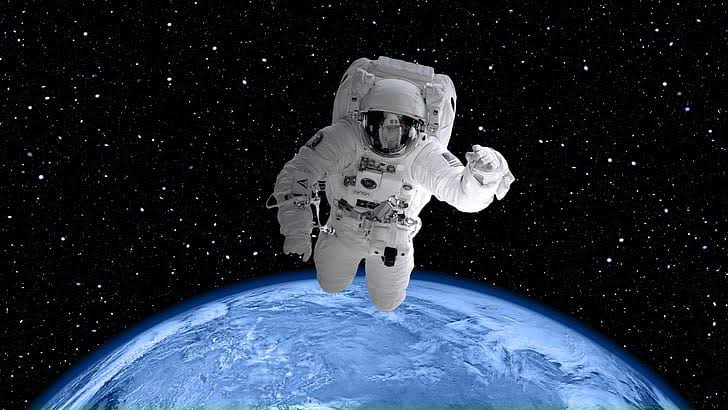 An astronaut is a well trained person who is specially meant for performing outer space works. The work includes checking out the programs and workings of the satellites, researching about the other planets from the space, observing and studying the earth from the outer space etc.All this works are done in the space station which is located in the space created by the particular organisations.

The best example for an astronaut from our country is Kalpana Chawla, the all time favourite of all Indians. We have heard so much about her in a growing days from our school and our the society.

Growing as an astronaut is not a simple work. Lots of studies, lots of training, lots of work is needed for becoming an astronaut.
Primarily we have to finish our B.Sc, M.Sc and PhD in the particular courses related to space.

We have to pass a physical test where our height, weight and all physical activities are being tested. After which we have to write an exam which was mainly for the selection of the astronauts which is conducted all over the world. Passing this exam is not an easy task because all over the world lacks and lacks of people participate in this exam and only 4 to 5 members are selected as an astronaut by the NASA.

Do you think after this exam we can become an astronaut. No, we have to pass the very tough trainings conducted by the organisations or authorities, which will be very risky and also test our mental and physical health. Because has an astronaut flying to the sky is not an easy task. We need so much of courage in our body and mind too. Hence this tough exams and trainings are conducted for testing the person.

That is why all astronauts such has Kalpana Chawla, Ravish Malhotra, Sunita William, Swapna Pandey etc flute space in their age of 33 to 35. Hence an astronaut needs a lots of patients for flying to space.

Also flying to space is not the only work of an astronaut. They have to perform lots of other works in the laboratory. For example, the astronauts fly into space with their crew members and just in case any problem in the space shuttle or satellite they are the only person to fix it. Hence an astronaut should know each and everything about the space shuttle in which day travel and also about the satellites in which they work. They have to do lots of researchers and know the machines very well.

Hence they have to be with the space shuttle or satellites during the construction time and study it very well. Additionally, they have to do lots of researchers has scientist in the NASA.

Salary of an Astronaut

According to Indian rupees between 412,650 INR to 903,537 INR per month, based on your performance in the exam, training and also the rank given to them, which is very much lesser than the salary of an average American Bank manager or Lecturer.

Also an astronaut do not get any facilities such as holidays or any other, which are enjoyed by an average citizen in America doing other works. Only a little of holidays and restricted works are given to an astronaut.